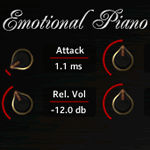 Anyone who knows me, or has read any of my past articles, will likely know that I’m a fan of pianos of all kinds, from the real physical specimens to libraries to physically modeled instruments. So any time I can check out a new one, no second thoughts are needed.

This time, I’ll be taking a look at Emotional Piano from Soundiron. Many people know Soundiron as half of the team formerly known as Tonehammer. We’ll see how it fares against the crowded piano library market.

Installation is as simple as downloading using the custom downloader from Continuata, which also unpacks and installs the files properly. Service Center activation is very easy if you go that route, taking just a few seconds to finish.

Initial loading of the instrument will take just over 700MB of RAM, which isn't too bad compared to the full size.

Piano sounds can be difficult to describe sometimes. I mean, in reality, there are so many pianos out there and they all start to sound alike to untrained ears after a while. I doubt my grandma can tell the difference between a Steinway and a Yamaha Motif. But still, we’ll try. Ready for it?

Shock. Awe. STUNNING! Ok, I know, not what you were hoping for.

Emotional Piano isn’t the brightest ivory in the box. In other words, this is an overall softer library than many. You won’t likely mistake this library with a Yamaha C7 any time soon. Though to be honest, Soundiron won’t reveal what type of piano was used, and I think that’s a good thing as sometimes, brand name can create a mental bias towards a library.

Soundiron describes Emotional Piano as a “soundtrack piano”. Spot on. I know, that’s not exactly an in-depth review of the sound, so bare with me.

The sound of Emotional Piano is quite diverse, but it tries not to be everything to everyone, and sticks to it’s sound theme rather well. In it’s standard form, Emotional Piano is a darker sound. Not a muddy dark sound as found in some libraries, but a more subdued sound that allows you to play dynamically without being overpowering. Attacks are soft but not subtle, hard enough without being shrill at all, and tame but not dampened. In other words, Emotional Piano takes the approach of sitting in the mix instead of breaking through it.

It is worth noting that Emotional Piano does NOT contain sympathetic resonance as found in some libraries and instruments out there. But it does a great job at covering up this omission with a thick character that appropriately distracts you in a believable way. I don’t forsee this really being too detrimental considering the character you get from the library, and the true intention behind this library really doesn’t suffer because of this.

Playing Emotional Piano is a joy. The feel is solid, without favoring either end of the velocity range, and the sound is just dynamic enough to allow plenty of emotion without being distractingly uneven. Of course, you can turn the dynamic response up or down as you see fit. It’s all easy to work with, and takes little of your system resources to make it all happen. 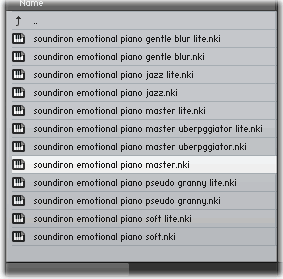 Now, what I’ve discussed so far is the “standard” sound of Emotional Piano. But have no fear, this is not a one-trick pony. Quite the contrary. Soundiron have included numerous patches to prove how versatile this soundtrack piano can be. And all the while, each sound is distinctive to the point of thinking to yourself, “I’ve heard this in a movie before, I’m sure of it”.

You’ll find patches for various needs, ranging from the soft and subdued, to sounds with a bit more bite, like the jazz patch, or even a randomly detuned “old granny” patch. All these presets serve a good purpose, and show that Emotional Piano can be quite versatile. All the main patches also include lite versions if you need to preserve some resources.

Interestingly, Soundiron have included a couple of patches that include the “uberpeggiator”, which is a full-featured arpeggiator that allows you to create patterns easily in a variety of different patterns. You get a surprisingly good amount of control over this arp, including control over the velocity of notes as the arp runs through it’s patterns(so you can emphasis various steps in the arp pattern), the ability to have the instrument hold notes for you after release while you add notes to the pattern, pitch control, and more. This is all in addition to all your 'normal' arpeggiator controls. All-in-all, the uberpeggiator is a great addition to the library.

Of course, then you have the effects patches. These patches have special programming or effects applied that give you sounds that are not of the “traditional” variety. 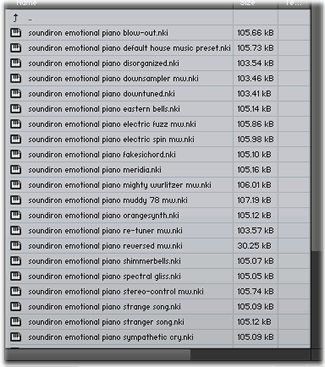 From the mangled to the pad-like, Soundiron has created some very interesting sounds. These sounds are typically applied using various effects, sometimes controllable by the mod wheel, and quite often applied only to certain groups of samples.

From the bit-crushed blown speaker to glimmering bell sounds and more, the presets cover a wide variety of great moods and intentions. You have reversed piano sounds, a variety of special spaces using custom convolution impulses, and others. Most presets are very practical in specific uses, while others actually create a cool character that you’ll want to use. It’s likely that you’ll still prefer this library for it’s original tone, but the FX are handy to have around for the more experimental types.

Of course, if you want to create your own unique sounds, you can do that as well. You have control over things like attack, pedal volume, release samples volume, and even a decay control for the release samples to set how fast they fade away. You have a “High Damping” control, which lets you turn on or off the natural ringing decay found in the upper registers of a piano that sound even after releasing a note.

Several built-in effects are included in the interface, including a convolution reverb complete with dozens of custom recorded impulses from Soundiron, ranging from the standard fare of concert halls and various room sizes, to the bizarre and creative used for anything from pads to complete timbre changes. And you also have the ability to load in your own impulses, should you wish.

In addition, you get a full 3 band EQ, a lo-fi effect for pure audio degradation, a rotator for the classic Leslie speaker simulation, a flanger, delay, stereo width control, and a Pro-53 custom filter. In some patches, you’ll find the “Skreamer” distortion module, a cabinet simulation, a phaser, vowel filter and others. Of course, you can always add your own inside of Kontakt, but these have controls already available on the interface. It’s a good selection that will give you plenty of editing power should you need it.

There is a respectable amount of detail in this library, with anywhere between 7 and around 20 layers, depending on the note. This isn't a lot compared to the larger libraries out there, but the programming and recordings were sufficient for a good sound. The velocity mapping is fairly even by default and not particularly weighted towards either end of the velocity range, allowing for the most compatibility with various MIDI controllers and their respective curves.

The Soundtrack Of Your Liking?

No piano is right for everyone, or fits every purpose, and Emotional Piano is no different. However, what it sets out to do, it does extremely well. Soundiron have found and sampled a very unique piano that contains a large amount of character that fits perfectly in your orchestral and soundtrack compositions.

I would say that Emotional Piano is a very good general piano as well, especially due to the editing options available within it’s interface. Fun to play, distinctive sound, low resources, and lots of very cool sound patches included, and you have a good package of piano variance to live smack in the middle of your next soundtrack.