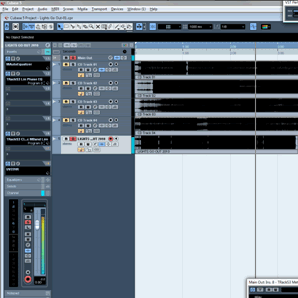 Two And A Half Hours(including lunch) To Master A Single

In mid February, Mark Greyson(http://www.soundclick.com/mgvsxxxx) approached me to master a song. Usually, my mastering jobs are a private matter between my client and myself. This time, however, we agreed to make the process public.

Here’s the full unmastered audio file for you to download(mp3 to save space):

Rather than hosting multiple versions of the full file, I’m using a quick excerpt to demonstrate the various processing stages. Here’s the excerpt in its raw form:

Mastering this song as a single took the best part of a morning. While my days are typically split into three sessions(10am, 2pm, and 8pm), I find it’s best to do mastering in the morning. That’s when my ears are the most fresh and I trust my judgements the most.

Like the song to be mastered, all reference songs have female lead vocals.

I used two pop songs as a reference for strong lead vocals and a true radio-friendly tone. The two club dance tracks were referenced for the elements specific to the genre – tighter and more present kick drum and low end.

I always use several reference songs for two reasons:

This is fairly mundane work. It consists of starting up the studio, creating the project file, and importing the audio.

My preferred software environment is Cubase 5. Dedicated mastering engineers will use systems like Pro Tools, Sequoia, or Sadie. I choose to use Cubase because mastering is just one part of my work. I also spend a lot of studio time composing, recording, producing, and mixing.

Once the project is technically prepared, it looks something like this:

Ignore the track inserts on the left hand side for now. Notice that I have each reference song on its own audio channel, alongside the song to be mastered(the fifth audio file in the screenshot). I always work with the track in solo mode. This way I can easy switch between the song I’m working on and each reference song by simply using the up and down arrow keys to change the active track.

Also notice the T-RackS meters at the bottom of the screen. I don’t rely on them as often as their ‘always-on’ window might suggest. I just glance at them every now and then to confirm that I’m hearing the same audio that the computer is throwing out. The T-RackS meters are inserts on the master channel, so they always reflect whichever track is playing.

There are three areas of interest in the Cubase Statistics window; Peak Value, DC Offset, and RMS.

Peak Value
Notice that the four reference songs have peak amplitudes of exactly 0dBfs. The song being mastered actually has peak values slightly above 0dBfs. Normally, audio files can’t have peaks above 0dBfs, but it’s possible in this case because the audio file was provided in 32-bit float format, which is the native processing format of most DAWs.

DC Offset
This measures how far away(on average) the waveform is from the ‘centre line’. It’s normally not a problem unless there’s a very big offset, which can reduce headroom and make it difficult to achieve transparent limiting. The song being mastered has a DC offset in the same range as the reference tracks, so this isn’t something to worry about.

RMS
This roughly measures how loud the song sounds. The two values of interest here are ‘Max RMS Power’ and ‘Average’. As RMS is a momentary measurement, a song might have different RMS readings at different points in the song(e.g. a low RMS reading in a quiet intro, and a high RMS reading during the loud final chorus). ‘Max RMS Power’ shows the reading at the loudest part of the song. ‘Average’ shows an average of all the RMS readings for the song. This is useful in a number of ways.

Keep in mind that RMS measurements are indicative of how loud the song sounds, but it is not exact. Many factors affect how loud we perceive sound. In this particular case, I raised the level of the song to be mastered by 9dB, even though the RMS reading suggested I might only need to raise it by 6dB to conform to the reference songs.

First, I analyse the reference songs. Their combined (average) tonal shape is represented by the yellow line on the graph:

You’ll also notice a number of EQ adjustments. This is MAutoEqualizer’s best guess as to how to apply EQ to make the song being mastered sound like the reference tracks. This varies in accuracy. Sometimes, it’s about 98% there, while other times(like this time), it’s more like 60%.

Like the level analysis, the tonal analysis does not tell us everything about how the song sounds. It is merely an indication. Automated analysis and correction can usually bring a song about 80% of the way there. It takes a human, however, to improve it from there.

Fine-tuning the level is usually straight forward. As I wrote above, this particular song required a level increase of 9dB. It’s important to realize that this can change as other aspects of the sound change. For this song, I initially thought a 7dB increase would be sufficient, but by the time I’d adjusted the tone and stereo width, a 9dB increase was necessary.

Fine-tuning the tone is more involved. MAutoEqualizer’s best guess EQ was about 60% of what I wanted the final tonal shape to be. By audibly comparing the song being mastered with the reference songs, I finally came up with these EQ settings:

Here is our updated excerpt, with these changes:

The next step is to adjust the stereo width of the track. For this I use the T-RackS EQ in mid/side mode. This allows me to widen or reduce the stereo image by different amounts at different frequencies.

Balancing the stereo width is a balance between focus and dimension. Reducing the width improves focus, and widening it increases dimension. Most songs benefit from more focus in the lower frequencies and more dimension in the upper frequencies, but the details are different for every song.

My approach for this song was threefold:

Collapse the low frequencies to mono
This focuses the kick and bass, and because of the gentle curve and high cut-off frequency, works on the lower mids to a lesser degree.

Slightly reduce the width of the midrange
This brought a bit more focus to the lead vocal- something it needed because it is actually quite dark and muffled.

My instance of the T-RackS EQ looked like this:

Here’s the audio excerpt after having its width adjusted:

The final step is to control the headroom of the song. You’ll recall that I raised the level of the raw audio by 9dB to bring it to the same level as the reference songs. As you’d imagine, this caused the peaks to go over 0dBfs. In order to keep the audio at the same perceived level while reducing the peaks, I use the T-RackS Multiband Limiter.

When using the T-RackS Multiband Limiter, I use a very short release time and maximum overload level. The short release time ensures that the gain reduction only affects the peaks and is not audible in the moments after the peaks. The maximum overload makes the gain reduction work less, making it even less audible at the expense of slight clipping.

Overall, though, this limiting and clipping is much less audible than you’d expect because this processor splits the signal into three bands, and each band is limited and clipped separately. This means that the limiting and clipping works much less than a full-band limiter and clipper would. It also means there’s much less inter-modulation distortion, where song signals in one frequency affects the whole signal. For example, this multiband approach means the bass can be heavily limited and clipped if necessary, while keeping the mids and highs perfectly clean. Similarly, volume spikes in the midrange or high frequencies(such as errant vocals or cymbal crashes) don’t bring the level of everything else down.

My instance of the T-RackS Multiband Limiter looked like this:

The end result was that, for this particular song, I was able to reduce the peaks by over 7.5dB without affecting the RMS levels or producing audible artefacts.

Here’s the audio excerpt after having its headroom adjusted:

By this stage, my ears had been working for a couple of hours.

It’s important to take a break at this stage. Often I’ve reached this stage, thinking the fine-tuning was finished, only to come back in half an hour to realize there was still some work to do.

After the final sound check, I trimmed and faded the start and end of the audio and exported it.

I’ve written in more depth about some of the background of what I’ve done here. If you want to learn more, check out:

Bonus: Tips For A Better Mix Next Time

While the final result of this job worked out well, it could have been even better if the mix were improved.

Another area of potential improvement is in the kick drum. Like the vocal, it’s rather dull and muddy. The kick could be given more definition and presence by giving it more attack, or choosing a kick drum sound with more attack. Another approach that can work, particularly for a mix that’s almost finished, is to layer the kick with a separate attack sound. This will give the kick more attack while keeping the low frequencies unchanged.