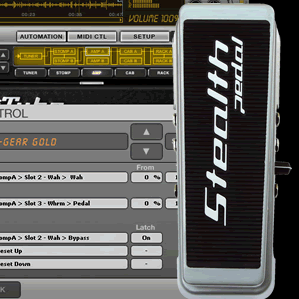 Stealth Pedal is a hardware offering from the same company responsible for probably the best selling and most well known guitar software around, the Amplitube line. They obviously know their stuff when it comes to the software emulations of classic and modern gear. But can they build a pedal?

You bet they can. And we're going to take a look at what might be one of the cooler pieces of gear I've run across in a while. In particular, we are reviewing the Stealth Pedal Deluxe version. However, the only difference between the standard and deluxe offerings is the software included in the box. We will not be covering the boxed software here as this is beyond the scope of our review. You can find more information here:

The pedal itself is the same in both instances.

That being said, the Stealth Pedal IS more things than it isn't. Primarily, the Stealth Pedal is a full-featured audio interface for both PC and MAC. But on top of that, it's an expandable MIDI controller with some extras on board.

It's immediately apparent once you open the box and remove the Stealth Pedal from it's clear plastic wrapping that this is one sturdy pedal. With the exception of four rubber bumper feet and the Stealth Pedal branded no-slip foot grip, the body of the Stealth Pedal consists solely of solid steel. Stepping on the pedal feels comfortable and stable, with virtually no give or shakiness, even on an uneven carpet. The feel is just what you would expect for a high quality wah pedal.

The pedal doesn't slide around easily, which is nice. As a piano player, I'm always dealing with sliding pedals, but not in this case.

Many connections are built into the sides of the Stealth Pedal, and not a one of them was loose or unsturdy. Cables seated firmly into place, including the USB cable connection. The quality of the actual connections mirror the rest of the pedal.

My one complaint with the build is the lone knob found on the side of the unit. Meant for volume and an extra controller, it sticks out just enough to warrant carefulness when throwing into your gig bag. The knob seemed a little bit more loose than the rest of the pedal, though never did it fail to function, and it never popped off. Something to watch out for though, at least.

Getting Up And Running

The Stealth Pedal uses a standard-sized USB connection and includes a rather lengthy(approx. 10 foot!) cable, which is a bigger deal than some manufacturers seem to think it is. The pedal is bus powered, so you don't need any sort of power supply, nor does it come with or have any way of using one.

Stealth Pedal requires three things to be installed; hardware drivers, MIDI control software, and X-Gear, all of which are found on the included disk. I had to go online to download 64-bit drivers, but they are indeed available and working fine. On the Mac, Stealth Pedal uses Apple's built-in CoreAudio standard, so one less installer to run.

Unfortunately, there is one additional step if you want to use the Stealth Pedal as a MIDI controller with anything other than IK's own guitar software. You need to load up the Stealth Pedal MIDI Control program, which controls the mapping of all controllers in depth(discussed later). If this program isn't running, your host won't receive the MIDI, even if the pedal is selected as your MIDI device. I'm not sure why this decision was made, as it's a small but obvious inconvenience.

That being said, if you are running any of IK's more recent Amplitube products, they will detect the pedal's MIDI control automatically and even assign the controllers to some default parameters, which can be changed.

One further note; on the side of the Stealth Pedal is a three LED "meter". This can be used as a guitar tuner when used with Amplitube software, which is very cool. Otherwise, it can also be a level meter for your input. This is a very nice touch. But as you will find out, it's one of many nice touches.

As an interface, the Stealth Pedal is fantastic. You can run as low as a 64 samples latency buffer on most systems, and 32 samples on some systems. The pedal ran smoothly at these levels on my Intel i5 box. I noticed no glitches, stuttering, dropouts, or other anomalies that sometimes plague interfaces when bad drivers are created. Everything was smooth and responsive.

You are quite limited in sample rate and bit-depth, with only 44.1 and 48kHz available along with the lone 24-bit setting for your bit-depth. This is unfortunate for the more extreme audiophiles out there, though it will likely suffice for most people. But if you really think you need 192kHz quality, you'll need to look elsewhere(and really, who needs that?).

You are provided with two audio inputs, both usable as either Hi-Z or line-level inputs(balanced or unbalanced). The first thing I noticed is that these inputs are VERY low on noise. Guitar signal came through loud and clear with as low of a noise level as anything else in this studio. This is great for guitar, obviously, and lets you push more signal through without noise getting in the way.

Two outputs are available(balanced or unbalanced as well) for hooking up some monitors or whatever else you want to feed your audio into. Again, low noise and good quality outputs. It's clear that great attention was given to the noise levels, and once again, I was very pleased.

There is also a single headphone output. I was a little disappointed to see that it is a 1/8th inch jack instead of a 1/4 inch, especially considering that ALL other inputs and outputs use the 1/4 inch size, including the MIDI control extension ports.

Overall, there is little to dislike about the quality as an audio interface. Notwithstanding the limited bit-depth and sample rate settings, this really is a great audio interface for everyday use.

You get plenty of options for MIDI control with the Stealth Pedal. Obviously, the wah-style pedal itself can be used to control a parameter in your host, including especially wah-type effects. But it also functions as a continuous controller for whatever you may need it for, just like any other expression pedal.

Underneath the pedal itself is a footswitch button that is also assignable. This button requires quite a firm push on the pedal so you don't accidentally change anything, and may be hard to press on some carpets. But this button can be used for any MIDI function requiring a switch.

The volume knob on the side of the unit is also available as a MIDI controller, surprisingly. You can switch between it controlling the output volume of the Stealth Pedal as an interface, or controlling a MIDI CC. Very flexible, though it will likely be of more limited use since the pedal will probably be sitting on the floor, and reaching down to use the knob may be inconvenient. But it's there.

The Stealth Pedal doesn't stop at it's own built in controllers though, and this is one of the coolest things about it. IK have provided two additional MIDI inputs on the pedal. One is an expression pedal input, and allows you to plug in any standard expression pedal such as that typically used with keyboards. My M-Audio expression pedal worked like a charm.

You then get a dual footswitch input. This is a single input that allows the input of two footswitches chained together, such as that available from IK Multimedia. However, you can also plug in a sustain pedal if you wish, or any other on/off type of switch. I used my keyboard's sustain pedal and it worked perfectly.

Pulling all this together is the Stealth Pedal MIDI Control program. Using this utility, you can map and remap everything that is allowed to be mapped on the Stealth Pedal, including all external MIDI controllers.

You have the ability to change the CC number of every control, the MIDI channel the control will be transmitted on, the range for each controller(low and high values), the curve/sensitivity settings for each control, and more. You can also set controllers to latch so the control signal "sticks" until you touch it again(great for the footswitches).

For both the built in pedal and the external expression pedal, you can calibrate the pedal so if it has lost some range, you can "show" the utility what the low and high range of the pedal is, and it will adjust the output to fit evenly in the calibrated range.

Finally, you can save and load presets of different settings. This is excellent for times when you have the pedals and switches set up for specific plug-ins and you need to change between them.

The whole utility is amazingly deep and flexible, and the possibilities for creative use of the Stealth Pedal's MIDI control is just top notch.

The Stealth Pedal can be deceptively simple, yet entertainingly complex. The different possibilities for setup are immense and almost unlimited. If you do happen to have extra pedals sitting around, they will find good use with the Stealth Pedal.

To think that in one device, you have your audio inputs, monitor outputs, two expression pedals, an expression/control knob, three footswitches, a level meter/guitar tuner, and a software amp package, it's just insane. And all in a size you can throw in the gig bag if you so choose. It almost makes you WANT to go out and buy some new toys to connect with the Stealth Pedal. When you add in the complexities of the MIDI control possibilities, a great piece of gear becomes better.

It would be foolish to assume the Stealth Pedal is only an audio interface, or a MIDI controller. Instead, it's a virtual hub to run your portable or even home studio. It's not the most complex or complete audio interface in the world, but what it does, it does very well.

Between the great audio quality and the solid build quality, along with the very flexible MIDI control, you've got a piece of kit that will probably become one of your favorites. What it lacks in size, it makes up for in versatility. And this is one guitar pedal that is useful for even non-guitar players, as it can add an extra degree of flexibility to your studio.

When you add the software package of both the standard and the Deluxe version, you have what just might be the most complete guitar package for the price. Bang for the buck indeed. Highly recommended, no doubt about it.