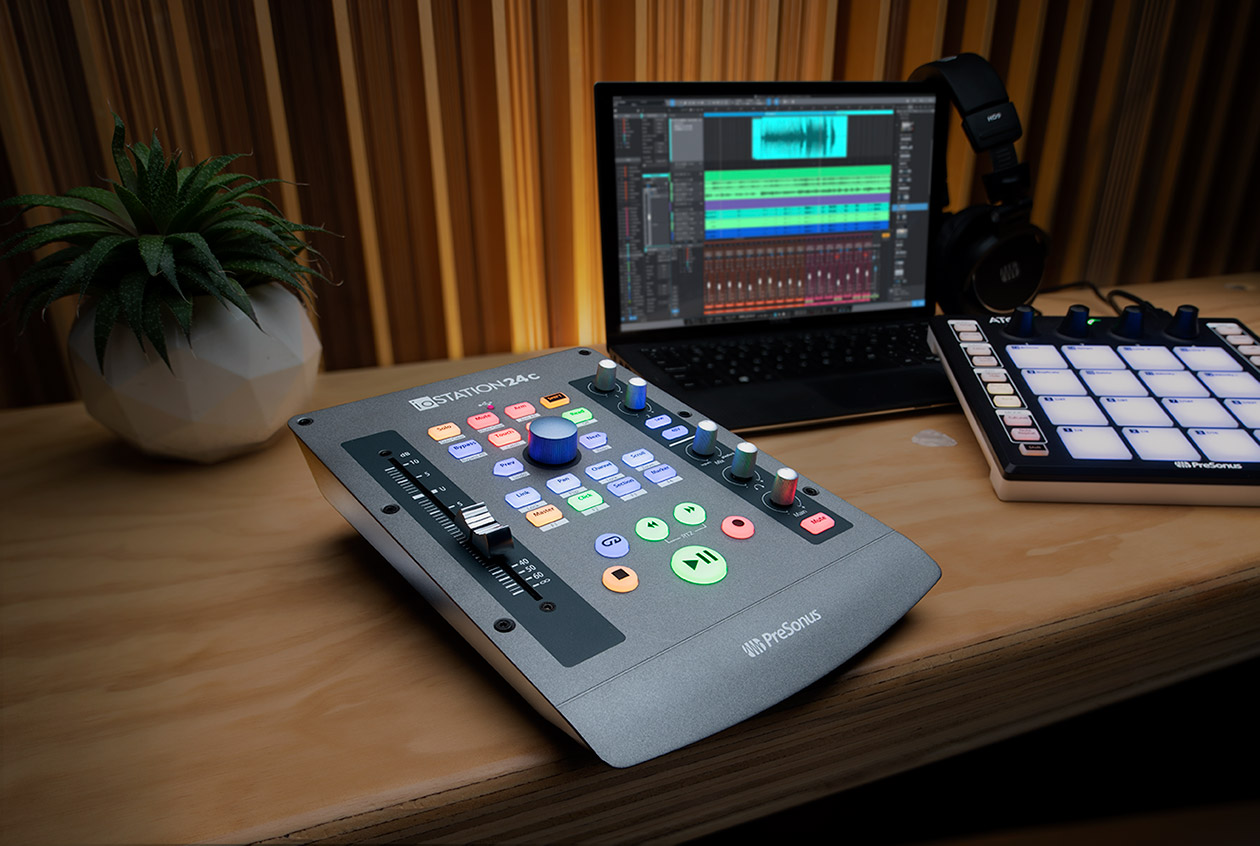 I’m a sucker for extra control. If you could see my desk, you’d see no shortage of extra macro keys, Stream Decks, palm keyboards, and more. It is for this reason that I’ve been considering adding a control surface for my DAW.

Considering that I use Studio One Professional quite heavily, the Faderport (which has unique Studio One integration out of the box) was a frontrunner. But when I saw that they took the Faderport and added a full audio interface? My interest was sparked.

That really about sums it up. Well, in an overly simplistic kind of way. In case you want the Presonus side of things, here ya go:

The ioStation 24c combines the Faderport with the bulk of their Studio 24c interface. If you aren’t aware, the Faderport is a control station for your DAW, including things like a motorized fader and a boatload of buttons and other controls for controlling and navigating your DAW. Mixing tracks, selecting, editing automation, etc. The Faderport is an extremely popular control surface.

The ioStation 24c takes the best of both worlds and puts them together into a single chassis, and the result is quite nice. The build is primarily metal, with a slight powder coating feel to the underside, and a soft brushed metal texture on the top. No sharp edges are there, and this is a well put together unit that has a bit of weight to it, which you want in your audio gear typically.

The audio interface portion of the unit features two XMAX Class A analog microphone preamps that are usually found in the higher end Presonus interfaces, which is quite welcome in something at this price point. The input jacks are combo inputs, allowing both 1/4″ unbalanced instrument and XLR to be used. You also get two 1/4″ audio outputs, a headphone output, and a bonus footswitch input, which is oddly not a popular feature on home audio interfaces, but it probably should be.

The footswitch input allows you to do things like assigning a pedal to start playback or record, and is useful if you want to be able to trigger a command while not directly in front of your computer, like at an instrument or in a vocal booth. I used an old sustain pedal and it seemed to work nicely.

All these inputs and outputs are rear-facing. I couldn’t feel any noticeable wobble in the XLR combo jacks, at least not beyond the normal play you get with these connections. Everything felt solid and I had no worries that anything was loose or poorly connected.

The unit is all connected through USB-C (thank you Presonus!), with a separate external power cord as well. So no bus power, but I wouldn’t expect that in a unit that features both phantom power and a motorized fader. Just know that if you’re wanting to take the ioStation 24c on the go (and it’s portable enough to do so), you’ll need both cables connected.

One more thing: an on/off switch. Yes. Thank you. I’m surprised how many hardware units and mixing boards don’t have this.

Knobs, Buttons, and that one Fader

There are a lot of controls to take in on the ioStation 24c. This obviously includes the single motorized fader on the left, which is quite solid and tactile. There are 25 middle buttons (including a center knob, which doubles as a button), and 3 additional buttons on the right side for the audio interface. Then everything is topped off with a total of 5 knobs for the audio side of things.

The fader is the star of the show, and will obviously play a big part in the purchasing decision of most. This fader is plastic, but it doesn’t feel thin or cheap. I had no issues with the fader popping off or wobbling around. As mentioned already, it is fully motorized. So if you have it assigned to an automated parameter, it will move during playback. This motorized engine also gives the fader a very nice amount of resistance that makes it very easy to perform slower fades and parameter changes.

By default, this fader is assigned to track volume for the currently selected track, or master volume with no tracks selected, but it can be reassigned to almost anything using your DAW. I found it to be excellent for MIDI automation. My one complaint would be that even in Studio One, it wasn’t immediately evident on how to reassign this fader. After a quick Google search, I was able to find the proper steps. But still annoying.

The bulk of the ioStation 24c’s panel is filled with multi-colored soft plastic (perhaps a form of rubber?) buttons. Every button is backlit, and has two levels of brightness to signify when a button is pressed or active. In addition, nearly every button has a secondary function that can be accessed using the “Shift” button on the unit, adding around 20 additional functions on top of the primary functions. Automation, track selection, and a variety of other functions are available.

You will also find a full transport section near the bottom, with obvious functionality. My only complain here is that despite the larger size, I would have loved to see the Play/Pause button enlarged even further. But let’s be honest: that’s pretty nit-picky, isn’t it? I should probably stop trying to find things to dislike, eh?

These buttons are grippy and solid, and pressing them takes an intentional push, preventing accidental button pushes as you move around the unit. However, I did find myself trying to hit one of them a few times and having it not register because I wasn’t pressing it hard enough. I would rather it be this way instead of the other way around though.

In the middle of the button array is a larger knob that serves multiple purposes. It is both a free-turning rotary knob as well as a button that can be pressed. This can be assigned, but in general, it’s used as a selection button. The rotation of the button is assigned either using some of the on-board buttons mentioned above, or through host assignment.

This knob is also the only control made from metal on the ioStation 24c. Ironically, it seems this knob has the most play of any other controls, with a slight allowance of side to side/top to bottom wiggle. But it’s not bad enough that I ever noticed it during normal use, or ever felt a worry about it going anywhere.

Finally, the audio interface knobs on the right, combined with a couple of additional buttons, are solid and have a tactile bump in the center position. They are plastic, unlike the main rotary knob, but felt as solid as I’ve seen on most other quality interfaces.

Overall, considering that the ioStation 24c controls are dynamic and many of them assignable, you have quite a vast level of control over your DAW. It will take a bit of time to get everything assigned and learn your way around the unit, but everything is within a short reach of each other.

There are many directions that hardware manufacturers can take with units like the ioStation 24c, which are designed to be a multi-purpose machine that doesn’t break the budget. And this often leads to manufacturers cutting corners and reducing quality, all in the name of convenience.

I was super pleased to discover that this wasn’t the case with the ioStation 24c. While Presonus does have what would be considered a more entry level, “lower end” class of preamp in some of their units, they instead chose to include 2 of their full XMAX preamps. These are the same preamps found in their higher tier interfaces and rack units.

In my tests, I found the signal to be extremely clean. There is a relatively non-existent noise floor and plenty of headroom. No unwanted distortion was present, and I couldn’t detect any unnatural saturation or coloring of the sound. The XMAX preamps generally just stood out of the way and allowed a great amount of dynamics through without having to fight against undesirable noise.

I’ve owned a lot of budget interfaces over the years, and I can’t say I’ve had one where the recording quality could be considered noticeably better than the ioStation 24c. It most definitely sits among the top in its price class, and even hits a tier above.

There is one thing missing from the audio side of things, and that is a proper meter. There is a clipping indicator above each of the input gain knobs (though considering the form factor, they really would be easier to see if they were below the knob). But considering they threw virtually everything else from the Faderport and the Studio 24c in, I would have loved to see the metering brought over as well, just for some additional precision.

The included software package is fantastic

Most audio hardware these days comes with some kind of software. Usually, you’ll find a lite version of a DAW, and sometimes a software instrument or two. But Presonus includes the “Studio Magic” suite. And it’s the best software package I’ve ever seen included with hardware. And it isn’t packed with demo versions of plugins or no-name developers. These are all well-known devs.

I won’t spend a lot of time on this, but the package is massive enough that it does warrant some space.

You get Studio One Artist, which in recent years has developed into an excellent “budget” version of Studio One Professional. But if Studio One isn’t your fancy, you get Ableton Live Lite. But then they throw in a boatload of instruments and effects. Here is a rundown of what you can expect:

You can check out more detail on each one on the Presonus website if you want. But there are several standouts to me, and you’re likely to get value from this bundle as well.

But just to think, this is all just an addon to another product. Bravo to Presonus for being aggressive with this package.

Jack Of All Trades, Master of Both?

I can’t say enough just how impressed I was with this unit. It looks good, sounds good, and doesn’t skimp on features just so you can have two hardware pieces in one frame. I love that Presonus literally took everything from two quality products and combined them.

For the price, when you consider the high quality XMAX preamps, a full motorized fader, a solid metal construction, and a software package that is alone worth more than the price of the ioStation 24c, this really is one of those “best value” products.

But even more than that, the ioStation 24c just FEELS great to use. And if you happen to use Studio One, the direct and zero setup integration is superb.

I’m not saying you should replace your audio interface with the ioStation 24c if you are already happy with it. You may be better just adding a Faderport to your setup. But if you need a quality interface along with full DAW control, you’ll be hard-pressed to find something better.