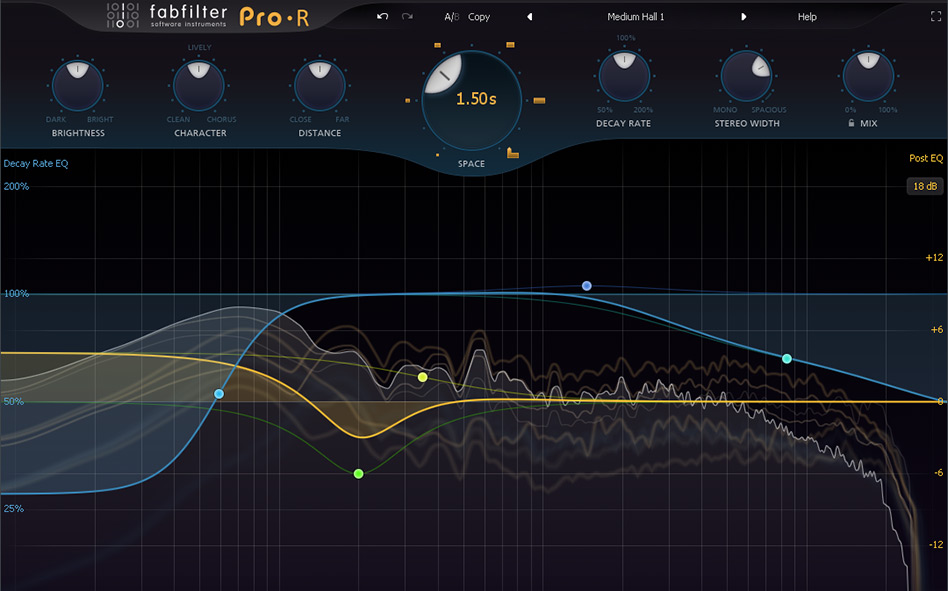 I certainly have enough reverbs. Some of the best out there, in fact. Yet, for some reason, when FabFilter announced they would be releasing Pro-R, I became curious and highly interested. I guess it says a lot about FabFilter’s reputation for quality. But despite not having any need whatsoever for another reverb, I just had to give Pro-R a try. So here’s what I found.

Say what you want about whether an interface matters, but I’ll continue to believe it makes a big difference. Not in sound quality, but in whether or not you want to use a plugin. If a plugin has a terrible interface that is hard to read and navigate, that’s a problem.

FabFilter has never had an issue with their GUIs, and Pro-R is no different. Clearly organized with colors that go easy on the eyes, Pro-R pretty much begs you to watch it while you listen. 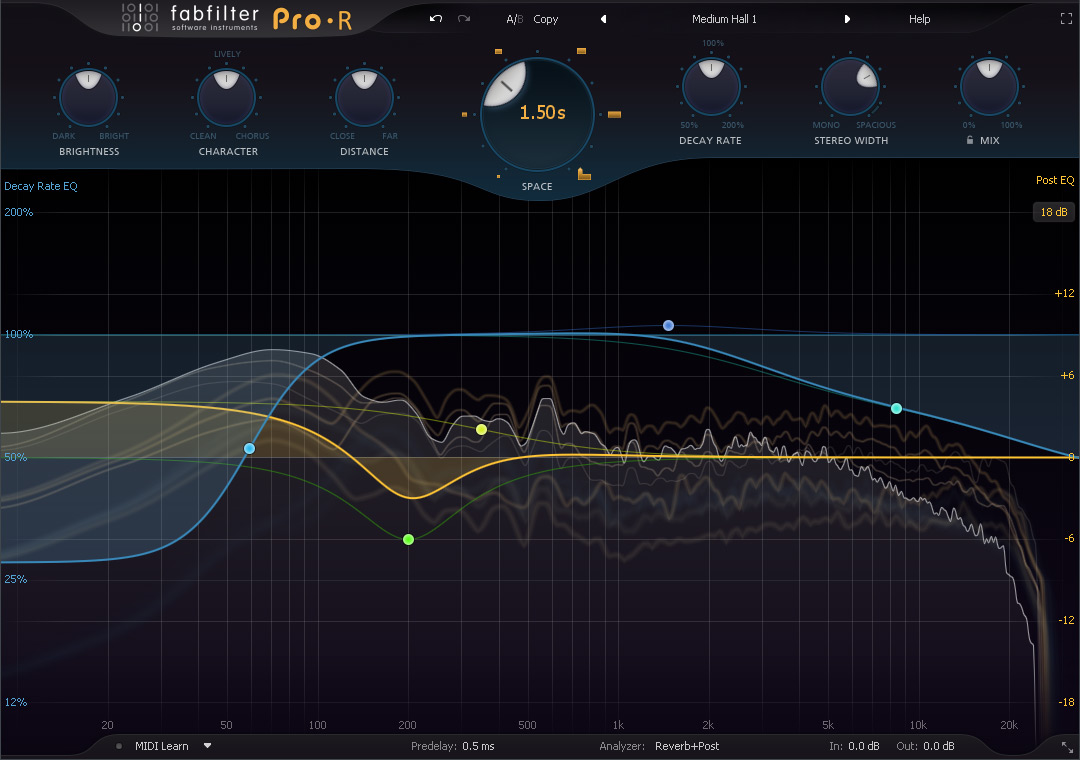 The interface is resizable, including three size presets, the ability to drag the interface in both directions to any size you need, and even a full-screen mode that removes all distractions, including those of the OS. All resizing is very smooth and doesn’t interfere with the sound, which is a testament to how well coded the interface of Pro-R is.

You get what I would consider a minimal set of standard reverb controls. Things like pre-delay and width are there, but you won’t anything to adjust density or diffusion, and you can’t control early and late reflections separately. I’m a big fan of plugins that provide every option imaginable, but Pro-R doesn’t let you scratch that itch, for better or for worse.

You do get some useful features for setting the distance between the listener and the source as well as the overall brightness of the reverb itself. But the goal here is obvious. Let the user define the size of their space and where the source is, and let them adjust how much or how little effect they need, and no fuss in between.

Pro-R also provides very helpful visual feedback, with controls and frequency ranges highlighted as you mouse over them, and clean-looking frequency analyzers with an adjustable amplitude range. Probably the best part of Pro-R is the frequency display, as it not only provides a standard spectrum analyzer but also provides a visual representation of the decay rate.

And this brings me to what is probably the defining factor of what makes Pro-R worth a look, even if you don’t need another reverb; the Decay Rate EQ.

While Pro-R does have a 6-band Post-EQ, the Decay Rate EQ gives you frequency-specific control over the decay rate itself. In other words, you can change how quickly (or slowly) the room sound fades away based on frequency. This doesn’t affect the actual frequency spectrum itself (that is done with the included Post-EQ), but only how fast each frequency decays.

If you want some lower end in your reverb, but don’t want it to build up and overpower your mix, you can set a fast cutoff for lower frequencies. If your source has a bit too much sibilance, roll off the upper frequencies to reduce how long the sibilance bounces around the room. You get six bands to work with, same as the Post-EQ, and you can adjust the bandwidth of each one all the same as any other EQ.

The Decay Rate EQ, while not a completely original idea, is so drop dead easy to use and practical. It provides a large number of extra uses. Without it, Pro-R would be good, but wouldn’t stand out as much. So I’m very pleased that FabFilter provided this feature. Of course, there is a global Decay Rate setting as well if you don’t want to mess with this. But you’ll want to.

One final note on control is the intuitive MIDI Learn. This is standard FabFilter fare, but it is worth mentioning as it is so well done. Once you activate MIDI learn, you then select a knob, move your controller, select another knob, move another controller, rinse and repeat. You can map all the controls in a matter of seconds.

Does Pro-R sound as good as it looks?

There’s no denying the history of quality plugins that FabFilter has released. So that also puts pressure on new releases to match the bar provided by previous plugins. It probably won’t come as a surprise when I say this, but Pro-R sounds really good.

You can start with the large number of presets, which are quite effective. But it is very easy to roll your own, and far more fun.

Most reverb plugins give you preset algorithm sizes for the rooms and spaces, and you then tweak within those spaces. Pro-R gives you one fluid space that you can adjust. There are no steps in this adjustment, but just one space that can be as small or large as you want. And to make things better, you can adjust this size (as with all other controls in Pro-R) without stuttering or dropouts in sound. This adds some very cool opportunities for spatial foley design if that’s your thing.

Pro-R is a reverb with a small amount of character, but it isn’t an over-the-top character. In the mix, I have found Pro-R to be very much out of the way. This is ideal for an everyday track reverb, which I believe Pro-R is designed to be. You won’t find too much color here, which goes against the trend. But it leaves you with what is a very clean sounding reverb that you can place on anything.

You can infuse some subtle chorus into the sound of Pro-R if you want a little more ‘swirl’ in the sound, but to my ears, it remains very manageable. The Character knob doesn’t change the sound in drastic ways.

There is no evidence of improper phasing or comb filtering, and the sound of Pro-R is smooth. I wouldn’t call it lush because to me that implies a reverb that stands out more. So I’ll stick with ‘smooth’. This is a very good thing, as Pro-R is very un-distracting. I found it to be quite stable on all sound sources, from vocals to drums. It really is an ideal track reverb.

I am especially fond of how Pro-R places sound inside of your chosen space. The Distance control is another excellently-implemented tool that is practical, and as with the space size, is adjustable in real-time without dropouts our artifacts.

While I’m on the subject of real-time tweaking, Pro-R is amazing in this regard. Every control can be adjusted while the audio is playing, without issue. Pro-R has no latency, so even enabling or disabling it provides no negative sound problems. It really is rare that a reverb can be adjusted this smoothly without consequence.

In the end, Pro-R provides you an excellent sounding reverb. The fact that is sounds this good yet doesn’t kill your CPU is awesome. But make no mistake, the quality stands up to reverbs costing much more.

Do you really need another reverb?

I asked myself this question as well when Pro-R was announced. After all, there are loads of great reverb plugins available in every price range.  The reverb market is downright saturated. But I was pleasantly surprised by Pro-R. The sound can stand up to the other reverbs in my collection, but without the CPU hit that some of them bring.

In addition to that, Pro-R boasts the same super easy copy protection as FabFilter has always provided, which makes it ideal for laptops and other devices on the go.

The sound of Pro-R is exactly what I would hope for in a reverb that is designed to be an everyday workhorse plugin. This is the type of plugin you reach for on every track because it is easy and doesn’t kill your CPU. Is it the best reverb out there? That depends on what you are looking for. But is it worth including in your setup? You better believe it.

If you are into tweaking, or you need some definitive emulations of popular hardware or famous locations, Pro-R isn’t your thing. Sure, it can do some of that. But it isn’t designed to emulate anything. It is designed to be used across the board, on all sources, in an almost unassuming way. The sound is excellent, the performance is light, and the interface is brilliant.